This is Part XVII of The Public Medievalist’s continuing series on Race, Racism and the Middle Ages, by Adam Simmons.

You can find the rest of our special series on Race, Racism and the Middle Ages here.

The BBC is revising history to suit its own anti-White narrative.

So claimed a commenter at the right-wing website Biased BBC. The object of their ire: the 2017 three-part BBC drama-documentary of the Norman conquest of England, 1066: A Year to Conquer England. The reason for this critique is that, in this series, Robert de Beaumont, one of William the Conqueror’s main aides, was played by an actor, Jotham Annan, who is black.

The historical Robert was not of African descent. But the BBC’s portrayal raises a question: were sub-Saharan African people present in medieval Europe? Despite their glaring absence from many histories, both popular and academic, they were. They came as traders, as explorers, as warriors, or—for those we only know by the archaeological record—for many reasons that we will never know. One in particular came as a king.

Robert de Clari was a French knight who was part of the ill-fated Fourth Crusade. In his account of the Crusade, Conquest of Constantinople (which he wrote around 1216), he offers a tantalizing account of the presence of Africans in medieval Europe. From it, we can begin to construct a wider picture when placed in context with other sources.

According to Robert’s account, in 1203 the Crusaders on the Fourth Crusade were in Constantinople playing a part in a major imperial power struggle. They had come there upon the request of Alexios IV Angelos, with the aim to restore his deposed father, Isaac II Angelos, to the throne, ultimately resulting in both being jointly named as co-emperors.

While they were in the city, they witnessed an unnamed Nubian king. As Robert described:

And while the barons were there at the palace, a king came there whose skin was all black, and he had a cross in the middle of his forehead that had been made with a hot iron. This king was living in a very rich abbey in the city, in which the former emperor Alexios had commanded that he should be lodged and of which he was to be lord and owner as long as he wanted to stay there.

Robert’s description of the king having a branded cross on his forehead would have been true for a Nubian at that time (a practice that is still occasionally continued today among some communities). This is a detail he was unlikely to have made up, which means that it likely was true.

In order to claim that the Middle Ages—and Christianity—were implicitly “white” requires you to ignore or erase huge swaths of history. One of those is the entire history of the black African Christian Kingdoms that thrived in northeast Africa during the Middle Ages. Some of these were the kingdoms of Nubia.

Nubia includes the region to the south of Egypt in what now southern Egypt and Sudan. It stands as one of the corridors between sub-Saharan Africa and Northern Africa, along the winding banks of the River Nile. Medieval Nubia existed roughly during the same time span that scholars attribute to the European Middle Ages: the long thousand years between the fall of the Kingdom of Meroe in the 4th century CE, and its eventual cultural conquest by Arab Muslims from the north over the 15th century.

Over most of that 1100 year span, Nubia was a Christian kingdom—it was “officially” Christianized by Byzantine missionaries in the 6th century. It stood as one of several black African Christian cultures in the region. Until around the 8th century, the Nubian region consisted of three separate kingdoms: Nobadia, Makuria, and Alwa. But at some point at the beginning of the 8th century Makuria annexed Nobadia, leaving two kingdoms.

Despite being one of the “Churches of the East”—i.e. non-European Christians—Nubia (and its neighbour Ethiopia) are rarely mentioned in discussions of early Christianity. Despite this, they stand alongside the Christian communities that existed in Syria, Armenia, Georgia, India, or even Egypt. And more, they existed not just as isolated churches, but as explicitly Christian Kingdoms.

That brings us neatly back to the Christian Nubian king arriving in Constantinople. Robert never reveals his name, but Nubian documentary evidence, surveyed by Giovanni Ruffini, suggests that it was possibly King Moses George. According to Robert, Alexios was said to have given this king “great honour”—emphasising the prestige of the king.

When the emperor saw him coming, he rose to meet him and did great honour to him. And the emperor asked the barons: “Do you know,” said he, “who this man is?” “Not at all, sire,” said the barons. “I’faith,” said the emperor, “this is the king of Nubia, who is come on pilgrimage to this city.”

This story of the visit by King Moses George appears not to have been of much interest to other authors at the time. Despite appearing at the court of the emperor in Constantinople, not a single (surviving) Byzantine Greek writer mentions the event.

This leads us to three possible conclusions. Either:

Those scholars who have addressed this event differ on which of these interpretations is correct. But my inclination is towards the third possibility. Firstly, this is because Constantinopolitans prided themselves on the ability to welcome many embassies and host many different cultures. For example, Eustathios, Archbishop of Thessaloniki, noted that they hosted Ethiopians at the court of Emperor Manuel I in either 1173 or 1174. This ability was important to them. Further evidence of this is that an interpreter was seemingly readily available at the court, which allowed the Nubian king to communicate with his hosts. Robert relates:

Then they had an interpreter talk to him and ask him where his land was, and he answered the interpreter in his own language that his land was a hundred days’ journey still beyond Jerusalem, and he had come from there to Jerusalem on pilgrimage.

Robert also made special note that the king was a Christian, and participating in one of the quintessential medieval Christian activities: pilgrimage. In fact, he was on the pilgrimage to end all pilgrimages. He had already been to Jerusalem, and had made his way to Constantinople (though apparently most of his retinue perished along the way). After Constantinople, the king had hoped to travel to Rome, and then to Santiago de Compostela, before returning to Jerusalem. Apparently, he planned to die in Jerusalem:

And he said that he wanted to go on pilgrimage to Rome and from Rome to St. James, and then come back to Jerusalem, if he should live so long, and then die there.

Such a tour was certainly ambitious—it may even seem fanciful. Looking at the Google map of the route, above, the trip, if done over land, would cover 13,246 kilometers (8230 miles). Ambitious though it may have been, these were well known pilgrimage spots.

The shrine to St. James at Santiago de Compostela in northwest Spain dates to the 9th century. The Camino de Santiago (Way of St. James) was (and remains) one of the most popular pilgrimage routes in medieval Europe.

Medieval Spain was a well-known multicultural melting pot of peoples. Pilgrimage to Santiago is mostly associated with European Christians, but this is an incorrect assumption. In fact, one 12th century Latin text lists Nubians as one of the 72 different nations from which pilgrims came to visit the shrine. Even more, a century after King Moses George’s trip, in 1312, historian Ibn ‘Idhāri al-Marrakuši also mentioned Nubians as pilgrims to Santiago. So even if the king did not go—or did not survive the trip—other Africans appear to have done so, and be counted among the black faces present in medieval Europe.

By contrast, we know less about the African presence in Medieval Rome. We have not yet found any evidence of Nubians in Rome—though that, of course, does not necessarily mean they did not come. In terms of the King’s trip, we do not know whether he passed unremarked upon, or never made it to city.

As a fascinating sidebar, however, we do know about a significant African presence in medieval Rome in the 15th century. Beginning in 1402, multiple Ethiopian embassies arrived throughout Europe (notably in Spain, France, and Italy). This contact was sustained—by the 1480s, the church of Santo Stefano degli Abissini was built/restored in Rome specifically for Ethiopians to use (one seventeenth century writer dates this donation as early as the 1160s!). This established a permanent, dedicated place of worship for visiting Ethiopians and the burgeoning Ethiopian community. We don’t know exactly how many came, nor do we know all of their names and stories. But the overall point that black Africans were present and accepted in medieval Europe—especially later medieval Europe—remains.

The travels of King Moses George only touches the surface of the African presence in medieval Europe. The absence of Africans in many medieval sources does not necessarily mean that they were completely absent from society. It instead reflects the interests and priorities of the author. Greek sources may not mention the visit of the Nubian king if it were not unusual. Europeans travelled to Africa; the reverse should be expected.

Africans should not just be associated with Islam, or paganism, or painted with the broad brush of the exotic “other”. Many were Christians and regularly interacted with European Christians in the Holy Land and in Europe. In a similar way to Robert and William in the BBC drama-documentary, some Africans and Europeans would have been companions, even friends. Most importantly, major European cities were never homogenous; a wide range of peoples of all shades were coming and going all the time.

Here are some places to begin to uncover more about the Nubian king’s visit:

The Mystery of Stephen the African 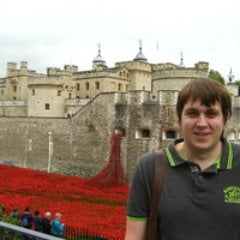 Adam Simmons is a PhD student at the University of Lancaster, UK, researching the impact and role of Africa in the Global Middle Ages. His thesis focuses on various aspects of transmission and interaction between Nubians, Ethiopians, and Europeans (via other languages and cultures of the Mediterranean) during the 4th-15th centuries. He is currently working on an ‘Occidental’ sourcebook to accompany Giovanni Vantini’s Oriental Sources Concerning Nubia (Heidelberg, 1975) for www.medievalnubia.info. For more information, his Academia page is http://lancaster.academia.edu/AdamSimmons.