Reddit FAQ: Was Sansa’s Abuse Normal in the Middle Ages? 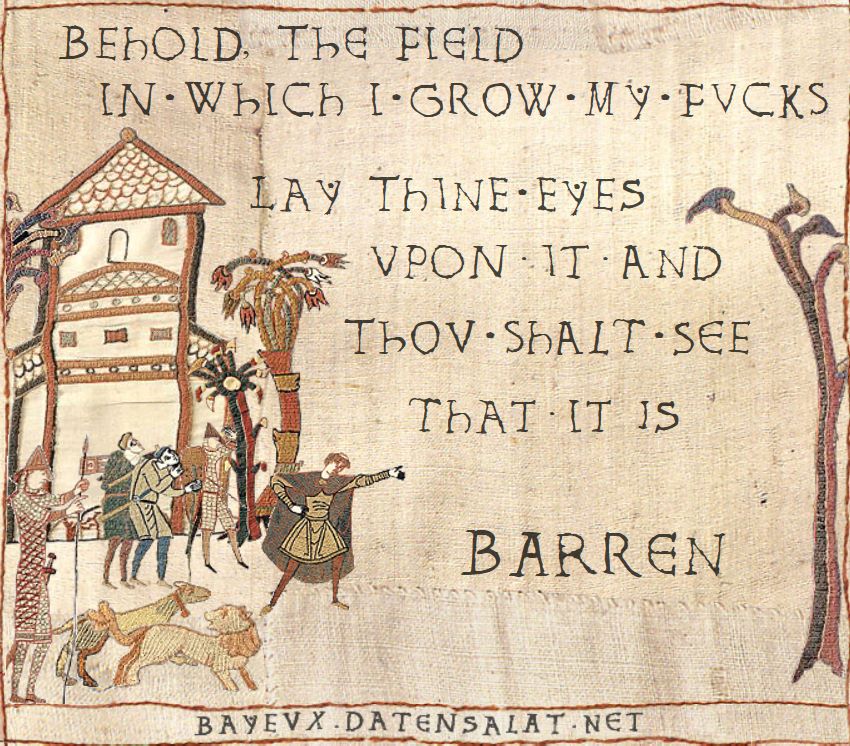 Note: These comments are only being posted here—on my turf—rather than on Reddit. And largely this is for my own cathartic amusement.

Q: Snoop Dogg says he likes GoT for the history and everyone laughs. One rape scene later, we’re talking to historians about GoT. C’mon man.

A: I can’t speak for Mr. Doggy Dog, but I think he’s actually right. My research has found that people do “learn” about the medieval period (in that their ideas are shaped) by fantasy representations of the period. Snoop was probably just being funny, but he’s right.

Q: TIL [today I learned] The term ‘medievalist’ exists.

A: Mazeltov! There are dozens of us, literally dozens!

Q: In other news, hygiene wasn’t so great either.

A: I presume you mean in the Middle Ages. If so, yes. Good spot. Feel free to write an article about medieval hygiene. I imagine it will be fascinating.

Q: Quoting me: “I’ve been asked by a handful of people to comment on thatscene from a recent episode of Game of Thrones.”

Am I alone in thinking that the rape scene was not THAT big a deal in the grander context of the show? Why does it merit a coded “that scene” label, as if it was so outrageous that you can only refer to it in veiled terms?

This is a show where a person was crucified, tortured physically and psychologically, and had his dick cut off. Why don’t we refer to that as “that scene”?

A: I seem to recall people being pretty horrified by Theon being tortured as well, and huge numbers of people being shocked to the core at The Red Wedding. But that’s not what you’re saying, is it? You just want to not talk about rape. That rape isn’t that big of a deal when there are other atrocities to think about? We’re going to disagree there.

Q: I’m a fucking sexual assault counselor for a living and i think this is so fucking dumb. Penises get chopped off, heads get chopped off, you see a corpse every show. But rape is an issue? I dont see the logic.

A: If you are a sexual assault counselor and you don’t see how rape is qualitatively different from other violence, I think you may need another job. At this moment of thinking, my structuralist brain sees it as a class of torture; violating the body of another to cause lasting damage and traumatize the victim’s mind for the purpose of asserting control over them. And I think torture is really, really bad. Shall I do a follow-up on torture?

Q: Wow that article was trash. Pointless prologue followed by rediculous conclusion. We shouldn’t have to struggle to find the argument.

A: Thank you for your well-reasoned feedback. By any chance, have you ever peer reviewed my book manuscript? This sounds oddly familiar in tone.

Q: I love when an article ends with a paragraph that makes sweeping, controversial claims that are barely related to bulk of the article, in a pathetic attempt to seem dramatic or interesting.

A: Where I come from that is generally called a “conclusion paragraph.”

Q: I read the entirety and then BAM at the end made up BS about ALL MEN.

A: Ah, you’re one of the ones who gets personally aggrieved when people discuss social injustices perpetrated by your group but not necessarily by you. Well, if you’ve never raped anyone, congratulations, have a cookie.

That said, you remember that part where I listed the medieval ideas about rape that are still present in our society and said: “if you’ve never heard those ideas, then you haven’t been paying enough attention.” Yeah, if you think that’s all made-up BS, then I was talking to you. Do take that personally.

The article is about a character that gets raped, more than likely you are reading it because you watch the show so you would already know this. It also saysTrigger warning Rape. So they bring it up right after anyway, “triggering” the breakdown.

Also, personally I think it’s catering to a culture of babying people and making it so people never face there issues and turn them into a time bomb of PTSD breakdown. Remember that time when medical professionals said you should never face your problems and avoid them at all costs? I don’t.

I was watching GoT once and someone said “OMG IS THIS A TRIGGER WARNING!?!?!?”

A: So, you object to my use of a trigger warning, which is a common device used to help warn people of discussions of things that might trigger unpleasant memories, possibly leading to a mental breakdown? You think it’s adding to a culture of babying and coddling… rape victims?

So until you’ve had someone you love fight to make it through a single night of sleep without being woken by PTSD-induced nightmares as a result of what happened to them, I would kindly request that you shut the fuck up.

Q: The article is interesting, but kind of hard to read. For example,

But considering the prevailing winds at the time, for a woman to discover they were being married to a partner who treated them with respect and kindness might have been more of a pleasant surprise than an expected outcome.

“They” is a valid singular pronoun, which is gender-free. However, using it here is poor writing: there is no doubt we are talking about a woman, so “she” would be expected, and that would avoid “they were” which is surprising given the singular “woman”. The segment “for a woman to discover that they were being married to a partner” parses at first as “a women finds out some other people are being married”, as in “Mary found out that Larry and Hermione were getting married.” It’s just confusing the way the article wrote “a woman discovered they [she!] were being married”.

Also, the author gives the impression of being terrified of the subject matter:

It’s almost like a caricature of someone trying to dot all the “i”s to fully comply with current PC norms.

A: Congratulations regarding the use of the word “they.” “She” might have been slightly more clear. You are technically correct, which, as we all know, is the best form of correct.

Also, re: my wanting to treat the topic of rape in a sensitive manner, and showing my support for those who have been raped and their allies, see above with regards to shutting the fuck up.

Q: [From Facebook] I’m surprised you didn’t include more perspectives from actual women. It just seems like a man writing about men writing about women.

A: Tha… act….huh. That’s actually a great point. A lot of the medieval female writers we have discuss the topic of rape, and while I don’t think any of them write in a way that is different from the points that I was making, the fact that I didn’t quote them is an omission. I should write a follow-up. Thank you!

That was fun. This flame-war was relatively mild though. When posting on reddit or other unregulated fora (like Youtube), be ready for this and much, much worse. But, if we’re serious about meeting people where they are, then you have to take the good with the trolls.